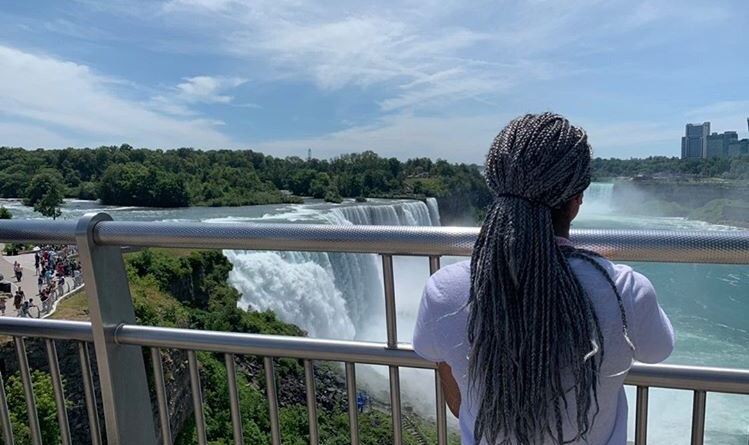 An Interview with Clara Tshiamanga
By EducationUSA Adviser Elisabeth Bloxam

When Belgian students dream of studying in the United States, many imagine the bright lights of New York City. But New York is more than the Big Apple. Just ask Clara Tshiamanga, who spent part of her summer in Syracuse, a college town in New York state that is closer to Canada than NYC! 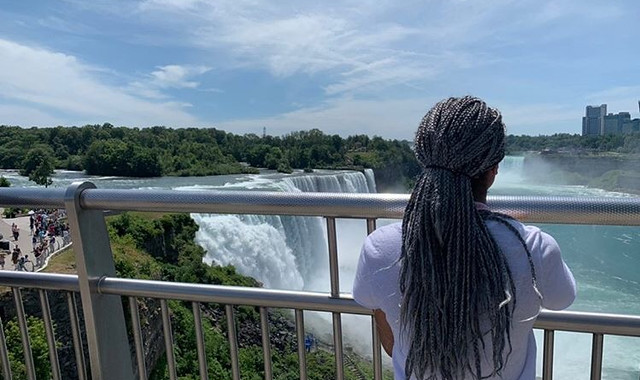 The EducationUSA Academy at Syracuse University offers participants the opportunity to apply for short, subject-specific programs on everything from aerospace engineering to public communications.

Clara opted for an intensive sociology course, intended to provide both secondary school and current undergraduate students with the equivalent of an introductory college-level class. “It was an intense class and we had to do a lot of group assignments. My favorite project was the group research because I had the chance to work with different students about something that we all found important. It was about police brutality and even though we didn’t all come from the same culture or background in my group, we could share our perspectives on the matter. It was so much fun because sometimes we would stay until late and then go grab something to eat outside and just laugh and relax with each other.” 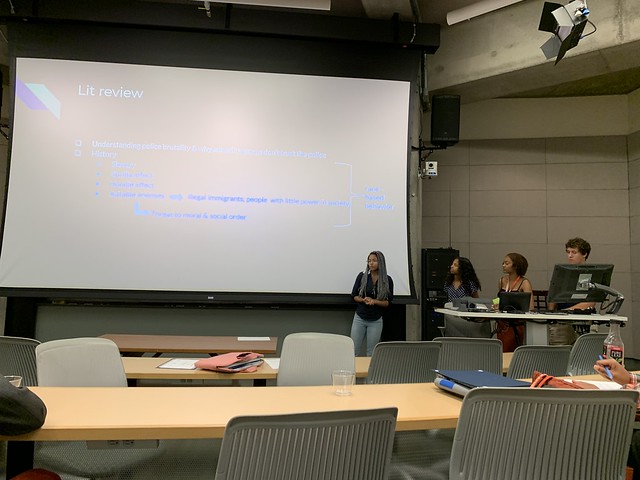 Before arriving in Syracuse, Clara had ideas about what to expect from the Americans on campus. “I expected everyone to be friendly, really smiley, and open … also that everything was going to be big.”According to Clara, her hypotheses checked out: “Not everyone was always smiling but they were all really open and friendly. Even the people who I thought looked really closed off were actually so nice. Everything was huge, from the food to the buildings; it was just mind blowing sometimes for me.”

For Clara, Syracuse was definitely a different experience than her previous travels to the United States: compared to what she’d observed as a tourist in North Carolina, the campus at Syracuse University struck her as more diverse and the people as more direct and relaxed. And of course, she noticed additional cultural differences between Syracuse and her native Belgium. “A difference with Belgium is that people at Syracuse smile more. They’ll always try to help you, even if that means they have to ask something to someone else. And in Belgium we usually give kisses for goodbye when we leave our friends but there it was either a hug, which I didn’t see too often, or just waving.”

Stereotypes about cultural differences go both ways, and Clara was surprised by some of the impressions that people in Syracuse had about her home country. “I remember there was one person that had been to Belgium before and said that Belgian people don’t really smile and are always in a rush. I just had to laugh because I have to admit that sometimes I also don’t smile and rush for no reason.” In general, however, she found that “not a lot of people knew about Belgium. The funny question that I always got asked was if I spoke Belgian so when I was speaking about Belgium, I was always telling them that there are actually three national languages. I also told them to never say ‘French fries’ to me but just ‘fries’ because Belgium definitely has the best fries.” 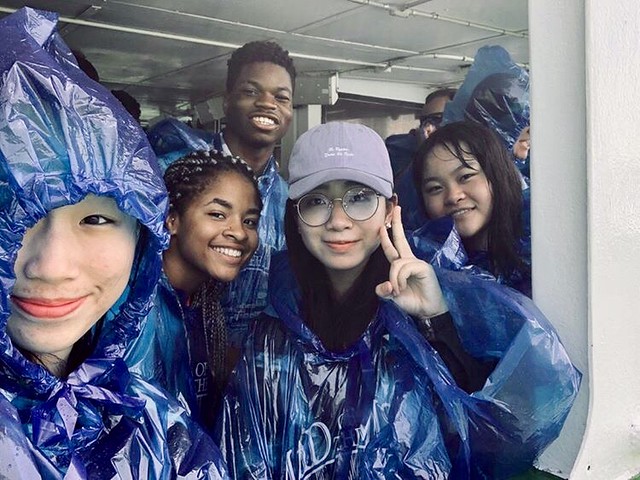 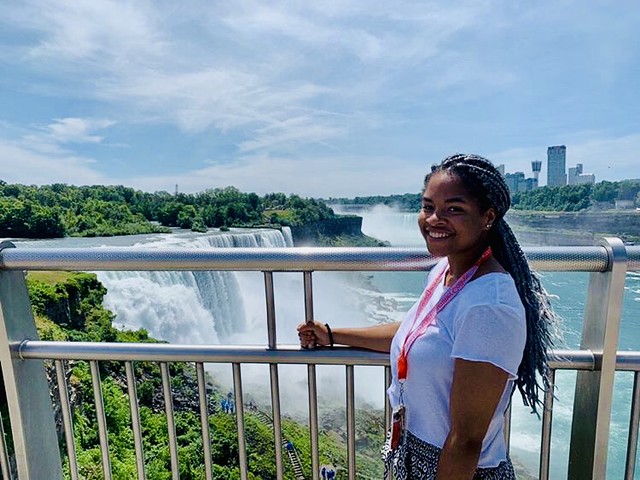 EducationUSA Academies include extracurricular activities to introduce students to nearby attractions and give them a taste of the undergraduate student experience. During Clara’s time at Syracuse, students visited Niagara Falls, the famous group of waterfalls at the border of the United States and Canada.

However, it was the more ‘normal’ student activities — like game night at the dorms or an ice skating trip — that stand out as Clara’s favorite moments of her time in Syracuse.

“Even though I loved the trip to Niagara Falls, I just can’t forget about the ice skating trip!” she told us. “During that trip I spoke and laughed with a lot of students that I only had seen once at the dorms or even not at all and so that trip created new friendships. People that had never spoken to each other were helping each other (and) falling together …. I actually almost fell because I’m really bad at ice skating and almost dragged a friend with me we couldn’t stop laughing about it. And when we were in the bus to go back to campus, I really felt as if we were one big group, there was music playing, people started cheering for no reason sometimes but it was so much fun, because it brought us all closer. 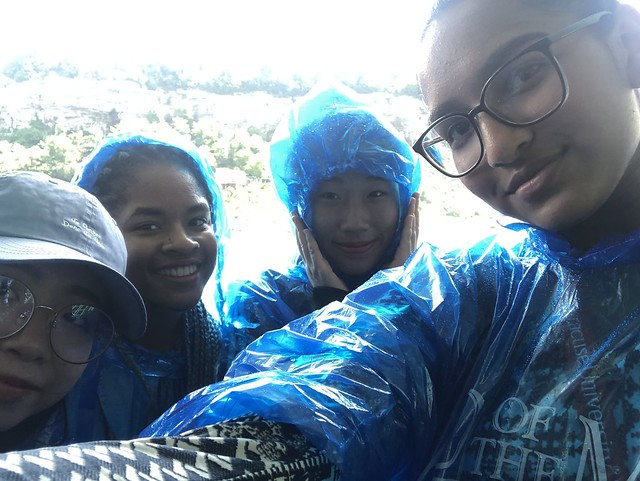 Travelling far away from home came with challenges, too. Clara remembered: “There was a day where, for some reason I just really missed my mom and I just had to talk to her. I also missed my cat a lot. Unfortunately, I didn’t see a lot of cats there, but thankfully all of the dogs that I petted at the park made up for that.” And keeping so busy on campus meant missing out on other normal summer activities, like watching a favorite anime program.

Now that she is back in Belgium, however, Clara has a whole list of reasons to feel homesick for Syracuse. When asked what she missed most, Clara said: “Definitely my friends and my professor, because she was truly amazing and really funny. I will also miss the nature because there were so many green and beautiful places that I never thought I would see in my life. And even though the course was intense I will miss it a lot because I’ve learned so much in such a short period of time.” 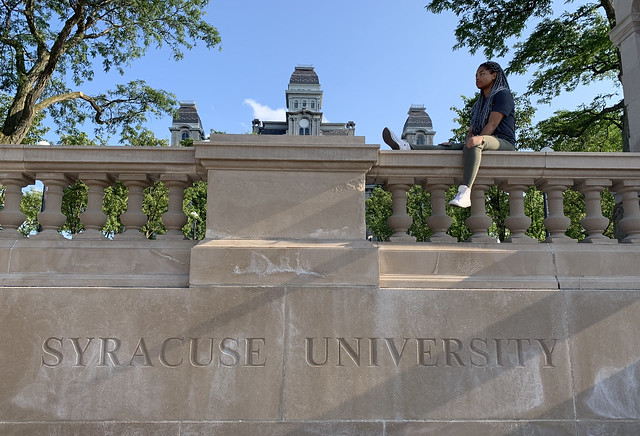 And what about Syracuse, the upstate New York college town she’d never heard of? After a two-week immersion, Clara’s a fan. “Syracuse University is a really beautiful place: there was a lot of nature on campus and the campus itself is huge,” Clara said. “But most importantly the people at SU are really welcoming and helpful. It’s a university where you can really feel respected and listened to as a student. They treat you like an adult, so they give you a lot of freedom. There were some rules to follow but I never felt as if the rules or anything we had to do were restricting the students from having a good time or being themselves.”

According to Clara, her positive experience at the EducationUSA Academy in Syracuse has inspired her to apply for further studies in the United States. “Since I had the chance to participate in the [college-level] classes, I got a taste of university life in the United States. It was honestly better than my expectations … and I’d already expected it to be amazing!”

For Clara, the opportunity to study in the United States at the undergraduate or graduate level is attractive because it would provide her with a cultural as well as academic experience. “I would like to study in the US because I want to share my culture and learn about other cultures in a new area, an area that’s really diverse but at the same time has a lot to learn and also has a lot to teach to others,” she explained. While all universities teach subjects like history and psychology, studying these topics from an American perspective would allow Clara to learn not just about the topics but about the United States itself. “And for me, someone that loves to learn new things, that just sounds like a dream because it’s not only learning something new — it’s learning something new in a new and different cultural environment.”