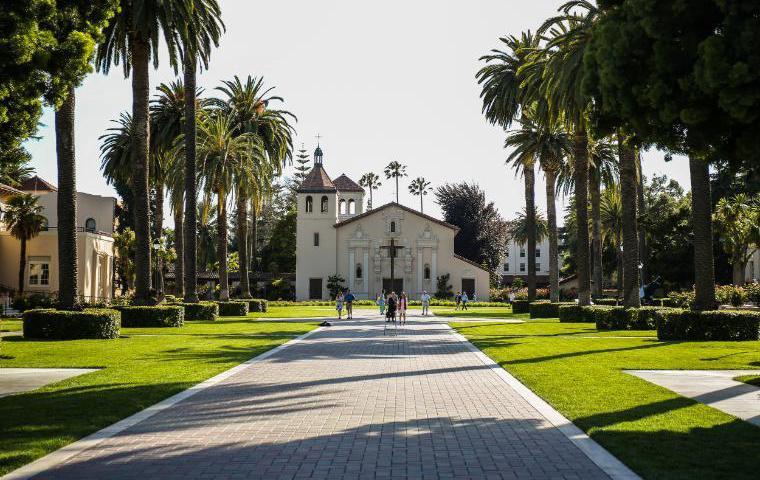 Having gone to public school my entire life, I did not know what to expect attending a Jesuit institution — ironic, considering that the Jesuit core value of educating the whole person is initially what attracted me to Santa Clara University. But what does it mean to be a Jesuit school? Would I see strange men in black dotting the campus? Would I be pressured into adopting Catholic practices? What even was a Jesuit?? These questions were pushed aside in favor of the more immediate pressures of move-in day and adjusting to campus life, but they never quite faded.

As time wore on and I acclimated to the college scene, this question — what does it mean to be a Jesuit school — reared its head in the form of friends at large, public universities wanting to know all about my experience at the small school in the Bay.  I didn’t have answers for them at first: this being the only university I have ever attended, I didn’t have anything else to compare it to. I assumed that the things I took for granted at Santa Clara were all apart of the standard college experience. It was not until returning home from winter break and hearing the ways my life at SCU differed from that of my friends that I really began to understand the uniqueness of my college experience.

For one, going to a Jesuit College means that the majority of our buildings — or at least something in them — are named after or related to the Society of Jesus (the Jesuit religious order) in some way. It influences the very presentation of our campus, both artistically and structurally. For instance, one of the residential learning communities is named Loyola (or Sobrato) in honor of the Jesuit founder’s birthplace. Several other things on campus bear direct relation to the saint himself, such as the statue of the man on a patch of grass deemed Saint Ignatius Lawn (pictured above).

On top of that, the Jesuits are actual people. With only 41 Jesuits on a campus of over 5,000 students they are not seen on every corner, but they do their best to make their presence known. I was surprised to learn how ingrained the Jesuits are in SCU’s daily life, working everywhere from Campus Ministry to the Ignatian Center (an office unique to SCU that is responsible for things like immersion trips.). One Jesuit in particular makes a point to sit in the student union every week day with a sign that reads simply “I’m a Jesuit … ask me anything you want!” My residence hall also hosted a casual conversation night where students were welcome to come and go as they pleased while four of the Jesuits lounged in our building’s basement, eating Chick-Fil-A and talking about everything you could imagine — it was not the type of environment in which I ever pictured meeting a religious figure. However, they were friendly and engaging: they wanted to know our opinion as students and people, actively encouraging us to answer the same questions we asked them. It wasn’t long before conversation turned from pop culture to theology, with all of us taking turns defining what religion and God meant to us. I left that night feeling invigorated, as if I had made four new friends as opposed to some ambiguously authoritative figure.

Residence life is different at Santa Clara because of the college’s emphasis on cultivating Jesuit values. Instead of Resident Advisors (RAs), we have a staff of Community Facilitators (CFs) and Spiritual Facilitators (SFs) working together to create an environment that is less like a dorm and more like a community. Many social events are centered around the Jesuit values of social justice and service or open dialogue and free-thinking in an effort to promote the education of the whole person. From my residence hall alone, I have seen a wide array of events; some aiming to provoke conversation — like “Is there a correct way to protest?” — others, simply to give back. But more than that, one of the biggest constants for my residential learning community has been our Spiritual Facilitator, Yoojin’s hospitality hours. Every Wednesday night, Yoojin bakes cookies in his small room on the 2nd floor, luring in dozens of students with the promising smell of freshly melted chocolate chips. Even if you only stop by for a cookie, Yoojin (a former Jesuit himself) makes sure to offer you a smile and ask about your day. If you stay past that initial hour, you’ll find a smaller group of students curled up on his couch and floor talking about issues like race relations in America, the pitfalls of the education system, and the like — once more paying homage to the Jesuit nature of our institution

Universities like mine also offer quite a few amenities that are more obviously “Jesuit”. Known as the centers of distinction at Santa Clara, they combine the best of the Jesuit philosophy with what students actually want; this results in programs that bring in riveting guest speakers (the Markkula Center for Applied Ethics), send students abroad for project-based learning (the Miller Center), and invite students to learn about other cultures through their own eyes (the Ignatian Center). Through one of these programs, I traveled to Guyana two summers ago to work with a local Jesuit organization and learn about the faith of the local people through the indigenous tribes of the Amazon. Considering the national average for college students studying abroad is less than 4%, this international opportunity is extraordinary.

Academically speaking, the Jesuit emphasis on discussion based learning is something I have found in nearly every class I’ve taken in my time at SCU. Teachers don’t want to lecture at you: they want to discuss with you. Many of my classes were arranged in a (semi) circle in order to promote this type of academic conversation. Of course, classes vary across majors and emphases (and yes, there are still some standard lecture-based classes!) but the core curriculum holds students accountable for their education in that it forces you to take classes outside of your chosen field. This liberal arts approach to education is a large part of what makes SCU unique and is something I come to appreciate with each passing quarter because I am exposed to concepts I never would have learned about otherwise.

So, what does it mean to attend a Jesuit school? This answer will not be the same for everyone, but for me, the biggest way I see the Jesuit philosophy at SCU is in its people. The core curriculum, residence life, centers of distinction, and the Jesuits themselves all promote a culture that encourages thinking for yourself and using that ability to give back to those who need it most. However, the students and staff of SCU truly embody this ideal. The people at this university were all attracted by its values, meaning we all want to be here, we all want to change the world in some way. This commonality makes the student body in particular powerful because our strength comes from the belief that free-thinking and the fight for social justice are not luxuries, but, rather, necessary. In short, being a Jesuit school means less about religion than it does wholeness and growth — there is nowhere else I’d rather be.

An intern at the Fulbright Commission in Brussels, Shelby White is a junior at Santa Clara University. The opinions expressed in this article do not reflect the views of the EducationUSA Advising Center or of the U.S. Department of State.